Posted on 23rd November 2017 in the categories: Automotive Industry, Magnetics

What is magnetic levitation?

Magnetic levitation, also known as maglev, enables objects to be suspended in air without any support as if in defiance of gravity. Descried as an “unsung phenomenon” of the past, maglev technology is now being used in a variety of fascinating and useful applications.

Like a ping pong ball being levitated on an air stream at the output pipe of a hoover, magnetic levitation is used in a similar way to levitate objects in air without any support other than a magnetic field. As simple as it sounds, there is an incredible amount of thought and precision required to make this happen.

More recently, the maglev technology craze has been tested on cars with Volkswagen having already developed a prototype. The plausible design, being built in China, is a two-seater disc like structure which can stay suspended a few inches above ground level and can zoom forward. Volkswagen has given the public an opportunity to post their ideas about the car of the future, thus they’ve named it the “People’s Car Project”. In doing this, Volkswagen appear to be staying ahead of competition by gaining valuable insight into the wishes, needs and demands of potential maglev car customers.

Maglev technology is completely different to that of hovercraft technology in which vehicles are cushioned on a bed of air. However, maglev trains are already in use in China, Japan, California and Denmark along with a few other countries. While trains do not ‘zoom’ in mid-air, there is a slight gap between the tracks and the train. Magnetic forces keep the vehicle slightly suspended over the tracks and guide the route of the train.  Since significantly reducing the loss of energy, maglev trains are reaching speeds of over 150mph. The workings of a maglev train can be seen in the diagram below. 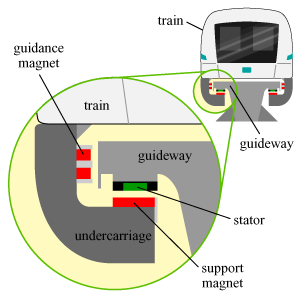 So, why maglev cars?

There are many reason to why maglev cars would appear advantageous, including:

Supporters of maglev cars say, “we will benefit from the economic development and financial opportunities it will bring, along with reductions in traffic congestion and vehicle emissions”.

So, what are the prospects for the future of Maglev? Could it be the transportation of the future and might there be other uses for it? Despite proving to be highly advantageous, maglev cars may prove to not be economically feasible. Since cars hover on a magnetic bed, roads need to be magnetised to hold the cars up. If roads are magnetised, they might not be suitable for cars which run on them and not hover. Therefore, the costs involved in this theory are huge.

However, considering the vast changes in technology over the years, and having already made way with maglev trains – will the automotive industry be next to introduce maglev? Is this reality or is it purely a fantasy in the scientific world?

At Goudsmit UK we sub-contract manufacture a vast variety of magnets and magnetic assemblies to suit your requirements. Contact us today for more information at info@goudsmit.co.uk or on +44 (0) 2890 271 001.

For more information download our products and services brochure.